Fentanyl: What is it and why is it in the news?

Fentanyl is a synthetic opiate, typically 50 – 100 times stronger than morphine. It is commonly used in medicine as a pain killer and anaesthetic, and is listed by the WHO as an essential medicine; such is the ability to block the sensation of pain.

In the UK, there is a known problem with Fentanyl; it is often added to heroin to make it more powerful and to ‘bulk’ the quantity, so it is increasingly difficult for the authorities to detect the true use of Fentanyl. However, it’s also taken on its own as a drug of abuse.

In the wrong hands, Fentanyl can be fatal, as the doses are uncontrolled and often individuals are unable to tolerate a high concentration. In some cases, it slows the body down so much, it can stop the heart.

It has recently been reported that the singer, Prince, died from a Fentanyl overdose(1) and since then the National Crime Agency have confirmed that 60 deaths have been recorded in the UK in the months of November 2016 to June 2017 from Fentanyl overdoses(1) 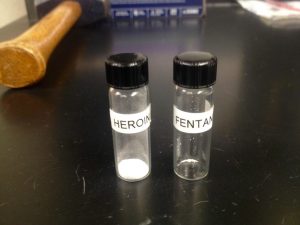 Example of a lethal dose of Heroin vs Fentanyl

As misuse of Fentanyl is becoming more of a problem, the emergency services are often called to respond. Paramedics are being advised to carry extra supplies of the drug Naloxone in locations of higher reported use, which counteracts the commatose like state in users, when they become un-responsive due to high doses.

If you have concerns over Fentanyl, we have screening tests which detect Fentanyl in a urine sample, giving a detection window of typically 24hrs.

The SureScreen Pocket Lab is perfect for the rapid detecting of Fentanyl.

Please call SureScreen Diagnostics on 01332365318 or email us on sales@surescreen.com.

Hear from some of our clients...